My daughter wants to be a pilot. I'm not sure what I think about that.

I casually tweeted the other night and didn't think I would get as big of a response as I did. Usually my tweets gets swallowed up in the Twitter universe, but not this one.

My daughter, Cici, just turned 13. She had to get a sports physical for fall, and so I took her the other night to the local CVS. The woman doing the physical was very kind, and at one point asked Cici wanted she wanted to be when she's grown up.

I just sat in the corner chair and didn't say a word. I've heard her say that she wanted to be a pilot, but never as a response to a stranger asking her the question. It seemed more real, somehow.

That night, as I lay in bed scrolling through Twitter, I thought that I would tweet about it. My Twitter is all about being a pilot wife, so the subject was right on.

My 13yo daughter wants to be a pilot.
I’m not sure what I think about that.

Boy oh boy, did a lot of people have a lot to say.

Let me get a couple of things out of the way:

- I've been married to an airline pilot for 19 years. I know what I'm talking about. Ok, so I don't know how to fly a plane, but I know what the life is all about.

- I am not discouraging her from being a pilot.

- I do not have marital issues. I'm very happy, actually. My marriage is very healthy. In fact, I actually think Steve's occupation helps make our relationship healthy (absence makes the heart grow fonder). It's interesting how people jump to the conclusion that pilots have shitty marriages. Sure, some do. But, certainly not all.

- Yes, Cici being a pilot would be badass. But, truth be told, she already is a bad ass!

- I'm not worried about plane crashes.

- My husband is an airline pilot. He has the knowledge to advise her of pathways to become a pilot.

- I truly don't know what I think about it. The life is very complex. I'm being real. Eyes wide open.

To be a pilot means that you have it in your blood. It isn't in my blood, AT ALL, and it isn't in my son's blood. Of course my husband has it, and he got it from his maternal grandfather, who used to spend hours at the local tiny airport just watching planes. Is it in her blood, too?

Cici has mentioned she wants to be a pilot thing before. Notice the pearl necklace 💗 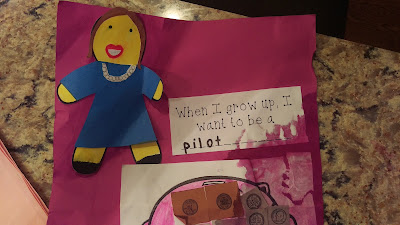 But she was so young when she completed the above project, perhaps she went with the easy occupation since Dad was a pilot. Perhaps she's mentioning it now because of the new Top Gun movie, which was totally awesome. She does say she wants to be a fighter pilot. Who knows. But, I have to say, I'm hesitant to fall in love with this idea. Of course I will support her with her journey in life, with all aspects. But, I'm still hesitant with this one.

To an outsider an airline pilot has it made: exciting new cities to visit, awesome overnights, fun crews, free flights for personal travel, great "office views."

But, I see the reality: coming home cranky as hell, deep exhaustion, missed holidays, different hotel every night, missing the birth of your child, missed vacations.

I clearly recall Steve's response many years ago to my question of, "what would you think if Cici wanted to be a pilot?" He paused and said, "she would never be the mother she wanted to be." I will forever remember those words. Are female pilots mothers? Of course! But, you need to have a strong support system. Whether that means good hired help, good family, and/or a good spouse.

And, I think this is the biggest thing I worry about with this profession: her family dynamic. Steve has mentioned plenty of times that he wished he would have thought about how much his occupation would have impacted his family life...but, when you are young and have a dream you sweep all that reality under the rug. Does Steve regret being a pilot? I don't think so. Does he regret not being home more? I don't know. Perhaps? I know that Steve is working as little as he can now (as in he isn't upgrading or going widebody which would mean commuting) because he wants to be home as much as possible.

Will Cici find a spouse that will support her? Not only with kids, if she chooses that path, but also the energy it takes to have a traveling partner. Do you know how many times I get called out from work to pick up a sick kiddo? Or how about putting the kiddos to bed every night after making dinner and doing the laundry? Certainly men do that, but finding the right one is key. Often times I feel like my career has been stunted because my main focus right now is managing the kids because Steve is gone so much. Will Cici be able to find a spouse that is willing to take a second role to her career? Pilots need to have a good support system.

Some may blast me for playing too much into gender roles. Let it be know that I am quite the feminist. I believe that my little lady brain is just as capable as any male brain. But, I also believe in the innate animal behaviors that females exhibit. Mothers are nurturers. Babies long for their mothers. I feel overwhelmed enough as a working mother...I can't imagine how traveling would add to the mix. I recognize this is something I don't have experience with, so if Cici wants to pursue this path, then I will absolutely encourage her to speak with female pilots. And thank you for all the kind offers from you gals on Twitter!

Yes, being a female pilot would be badass. But, Cici already is badass. She has an amazing spirit. She speaks her mind, and I'm confident she would hold her own in a man's world. Her confidence is enviable.

She's gifted with math, so I know the numbers part of flying would come easily to her. She is a bright girl, who is very competent and capable.

She actually just started driving our boat this weekend. So, she's learning skills at an early age. Girls that drive big boats are badass! 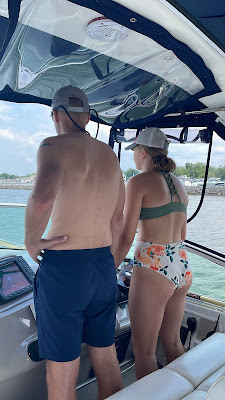 As I went through all the comments from my tweet, here are a couple answers to come comments and questions:

Free flights don't interest me...already have them, and half the time we buy tickets anyway because non-reving is so hit or miss these days.

Some think aviation is a "fantastic" and "awesome" and "wonderful" career. And it is. It's not a 9-5. You have the opportunity to see the world. But, who loves sitting in a crew room for 3 hours, and then your flight is delayed even more. Who likes missing their commuter flight home?

I'm not in need of reevaluating my parenting. Quite the harsh comment to make to a stranger. I think I'm pretty good at it. I just know that being a pilot isn't all that it's cracked up to be. Ask any pilot who will give you a straight answer, and they will see where I'm coming from. It isn't just a job, it's your life. And all aspects of your life are impacted. I looking beyond how "cool" it would be, and being real.
Many people don't know what to think of my tweet...and that's the point. I don't even know what I think about it. Aviation is just so darn tricky. I've been around this life for 20+ years now. Some parts are awesome, but some parts are really tough. Many times when people get into flying, they don't get what the full road is like. I've shared that road for a couple decades now, so I have perspective.

Bottom line is that, of course, I will encourage her to follow her dreams. If she wants to pursue flight, then I got her back. I'm okay with the non-traditional paths. Our son, for example. is very interested in forging. He's an amateur blacksmith who's constantly researching and takes classes...and buying metal and all other new tools he "needs."  He has a forge in our yard. Not traditional for a 14yo, but we're supporting his passion. He, too, is bright and I know could have a very successful career. But, I also know that happiness in your career accounts for a lot, so if forging is where he wants to be then I got his back, too. 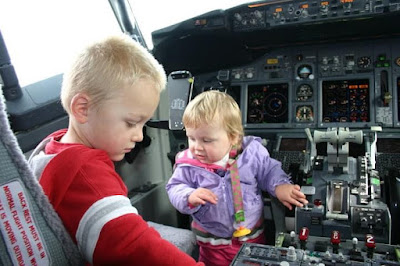 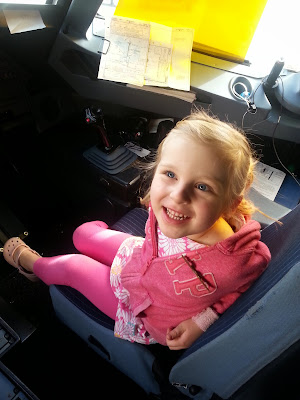 Whatever path my girl takes, I will walk right by her. There are plenty of times as a parent where I just don't know about something, and I am not too proud to admit otherwise. This happens to be one of them. And so, I tweet about it.

** and to any young lady out there who is thinking about becoming a pilot...follow your dreams! If it's in your blood, it's destiny! This post is coming from a mother's point of view, and mother's worry about anything and everything when it comes to their children.